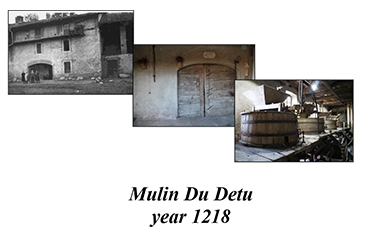 Once upon a time… There was “Lou Mulin du Detu”, the ancient, historical watermill of “Ruata Bassa” (district) of Giaveno ( Turin, Italy), via Beale 8.

This watermill was built on 1218, like tell us a sign today partially visible above the old door entrance.

“Lou Mulin du Detu”, at origin was abbey’s mill, belonged to the Sacra di San Michele and managed by the Benedectine’s monks.

Between 1877 and 1960 this watermill was managed by Giai Via Benedetto, than by his son Giuseppe (called Pinot), than by the daughters of Pinot: Maria Rosa and Rosanna (the mother of Giuseppe Colombatti), and grinded many tipes of cereals, and the folurs were sold.

Now the watermill belong to Giuseppe Colombatti, gret granchild of Detu, and is again open, works again, but only like a “museum”, to show how it works and to visit it.